It was twenty years ago, when attempting to insert traditional studs in the shoes of an excited horse at a competition, that Bruce Jolly thought "There has to be a better way of doing this!"

He spent the next five years using his engineering background to develop a revolutionary new design. He tested it extensively obtaining feedback from a variety of riders at every level, from Pony Club and Riding Club to International. The results were evaluated and a series of alterations and adjustments were made until the design was just right. It was then patented, a British precision-engineering company was selected for the manufacturing, and SupaStuds were born.

SupaStuds were officially launched at the BETA  International Trade Fair in February 2005, where they were awarded the prestigious Innovations Award for Safety and Security. Since then, the company has grown rapidly, with over one hundred stockists in the UK and abroad (see stockists page for details). We also have a tradestand at most of the largest events, as well as the website.

SupaStuds' range of products has now expanded to include a range of clothing with catchy slogans as well as spanners and stud boxes. There are several new products due to be launched shortly, so keep an eye on this website! 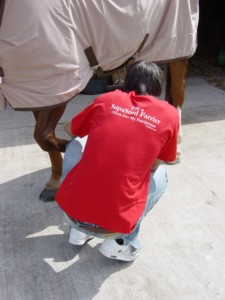