Award-winning SupaStuds have a unique, self-cleaning design which enables them to be screwed into a shoe without previously re-tapping out the hole. This makes them far faster, easier and safer to insert than conventional studs. A high-tech manufacturing process is used to harden SupaStuds, making them longer-lasting than tungsten tipped studs as they wear evenly. This hardening process also makes them rust-resistant, prolonging their life.

SupaStuds have been developed in conjunction with, and are endorsed by, top eventers such as Matt Ryan. British Team farrier Haydn Price, Olympic Silver medalist Mary King and Show-Jumping Grandmaster David Broome are also supporters.  SupaStuds are used by many of the top event riders in the country and have become the studs of choice for thousands of competitors at every level across the board in equestrian sport. 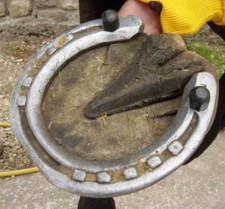